It’s spring 2020, which means backpacking season is right around the corner. I, like many of you, look forward to this every year as it means it’s time to get out in the woods (or high in the alpine in our case usually) for a few days with no cell signal, no electricity, and some pretty incredible views.

I remember growing up on the East Coast in the Appalachian mountains and going camping with my Boy Scout troop. We did some pretty ridiculous stuff, like one time carrying in a dutch oven (that’s right, a full size cast iron dutch over) to make pie over the fire at camp.

Gear has matured a lot in the last twenty+ years since I’ve been backpacking, such as the rise in hyperlight gear and so many artisanal outdoors brands popping up all over and dominating our Instagram feeds with their ads.

One of the areas that I have watched closely is backpacking stoves. Back in the day we’d usually take heavy-ish stoves with us backpacking complete with big containers of fuel (white gas, usually) to power them.

But a few years ago, I started to get into making my pack as light as possible (I still have a long ways to go, but it’s getting there as I cycle out gear) and needed a new stove. My wife and I combined gear when we got married in 2014 which meant I had some new stuff to play with/use, but as gear wears out I wanted to figure out what was best to replace old stuff with.

So, that led me on a search of the best backpacking stoves and here is what I’ve found.

There are a lot of options out there on the market, but these are the ones we stand by. Here are our reviews of each. 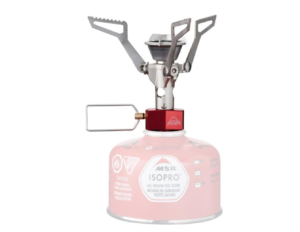 I used to carry a large stove, but in summer 2015 I was in Alaska with my wife and we realized we had forgotten our stove and our trust Jetboil wasn’t going to cut it for everything we had planned (and had already bought) for our trip near Seward.

So, we went to REI in Anchorage and browsed a lot of stoves, debating what we wanted to get. We didn’t have much more room at all in the pack and wanted something that would also fit the gas we used for the Jetboil, so we took our friends’ advice (who had loaned us their MSR Pocket Rocket a few years before) and bought on.

I have to say: this is singlehandedly the best money you will spend on a stove.

Retailing for just $44.95 (and often on sale), this is a steal for something that you’ll use all the time if you backpack at all.

Next up, the second stove that we almost never leave home without.

When my wife and I got together in 2013, she brought her Jetboil into the relationship. I have to admit that I was initially dubious because “it only makes hot water”. Turns out, there is a whole set of people who pride themselves on making everything they eat while camping with their Jetboil.

While we’re obviously not in that crew, we do love our Jetboil and it goes with us everywhere. I’m even considering buying a new one (maybe not this season because we have a newborn, but likely in 2020) since the built-in starter on ours (from 2011-2012 I believe) no longer works. We just light it with a match/lighter now (no big deal).

The Jetboil is fantastic for pre-caffeine coffee making, making some sort of protein (quinoa, etc) to go with dinner, and we’ve even cooked vegetables in it. 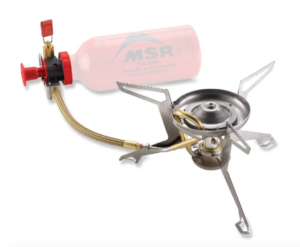 Another good option if you’re ok with a bit more maintenance than the Pocket Rocket, or looking for something for a larger pot and/or that can be blocked more easily from the wind, is the MSR Whisperlite.

The best use of this stove is when traveling internationally as it can easily move between white gas, kerosene, and unleaded gasoline which means that you can always find a source of fuel.

At 10.9oz it’s 4x heavier than the Pocket Rocket but less heavy than the Jetboil and more consistent/versatile than the Jetboil. It can boil a liter of water in 3.5 minutes with white gas, which outperforms the competition.

It’s a stove that has stood the test of time, so if you’re needing something that will be useful in many places around the world and you’re ok with a bit of maintenance (of the hoses etc), then this is a great stove. 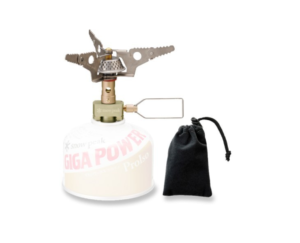 If you’re looking for a slightly more affordable alternative to the Pocket Rocket, then you should check out the Snow Peak LiteMax stove.

Coming in at 1.9oz, it’s lighter than even the MSR Pocket Rocket 2. The reason why we buy stoves like this is their weight after all, and this one is the lightest you can really find.

It does take a bit longer to boil water, coming in about a minute slower than the Pocket Rocket. But, when you’re more concerned about weight than anything else this is a great choice for your setup.

I personally find the fuel adjustment on the side to not fold up as nicely as the Pocket Rocket 2, but that’s more personal preference than anything. 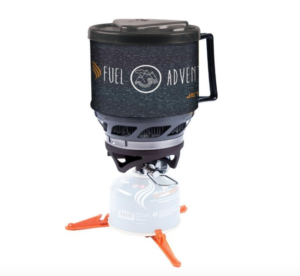 Finally, if you’re looking for a light stove that doesn’t require an extra pot you should check out the Jetboil MiniMo.

This is a smaller version of the full size Jetboil, yet it still holds 33.8 fluid ounces (1 liter) which is the same as the Jetboil Flash.

The Jetboil Minimo is most often used by those who have a severe caffeine addiction (like yours truly) and is best used when you’re optimizing for comfort instead of weight.

I’d take this on a shorter hike in where I was wanting to set up a full kitchen with multiple fuel canisters and be able to heat multiple things at once over this and my Pocket Rocket.

It’s a great tool to have in your gear shed, but it has a very specific use. That said, it fits on this list because it is extremely well loved and reliable.

How to choose a stove

If you’re looking to get a new stove, you need to ask yourself a few questions to really assess what stove is right for you.

Of course, this is about backpacking stoves and if you’re backpacking then you probably know what you prefer and need.

Before you go to buy a new stove, ask yourself a few questions:

Stoves are great because they’re not too expensive, can be swapped out easily, and don’t have to take up a ton of space.